The 3rd edition was again a success

Sunshine, twelve top teams, lots of enthusiastic spectators and a high profile visit from Manchester City coach Pep Guardiola and Kevin De Bruyne. The 3rd edition of the Kevin De Bruyne - KDB Cup ended successfully. Young and old enjoyed the international U15 tournament in Drongen. The many words of praise from the press, teams, sponsors and spectators are already [...] 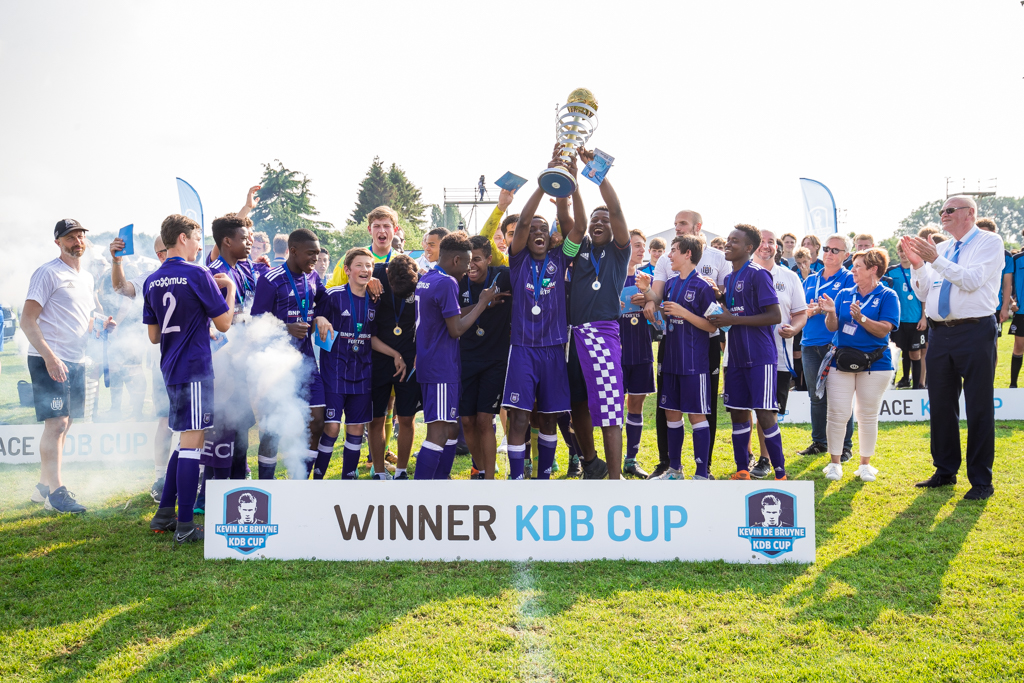 RSC Anderlecht is the big winner of the 3rd edition of the KDB Cup, the international U15-tournament named after Kevin De Bruyne. A strong field of participants - Manchester City, Turkish Beşiktaş and Russian Zenit Sint-Petersburg were there for the first time -, an extensive side programme and notable guests like Kevin De Bruyne himself and RSC Anderlecht. 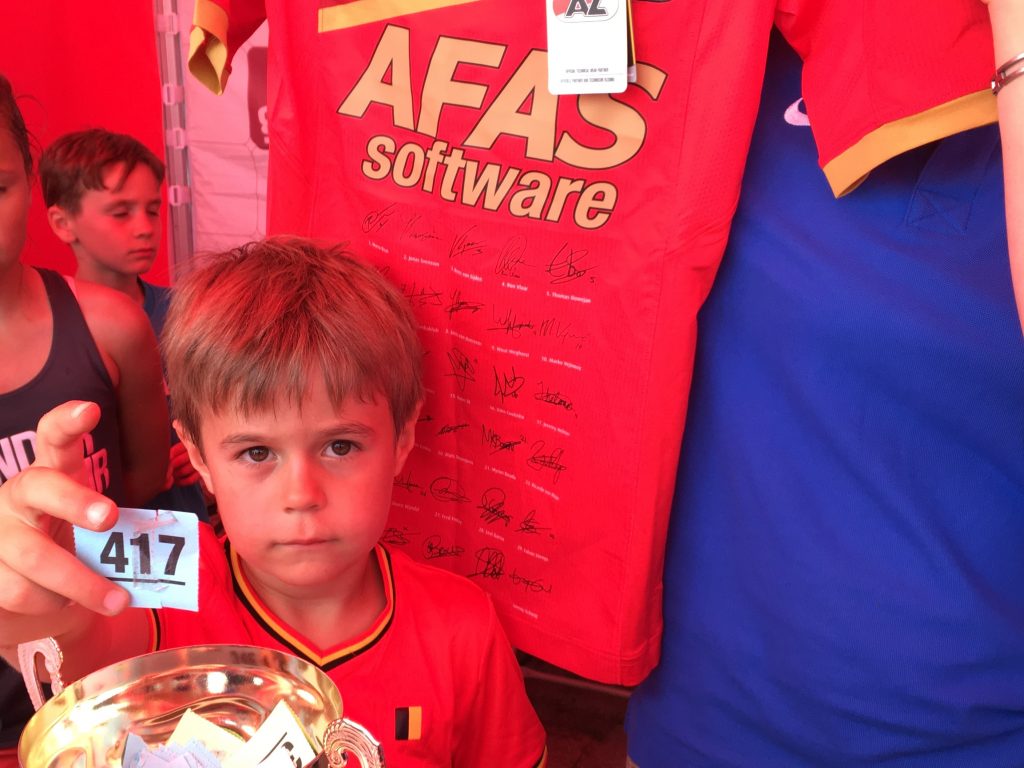 Those who bought a tombola ticket during the KDB Cup had a chance to win one of the signed shirts.Some innocent children's hands drew the winning numbers. The signed shirts of the A teams of the tombola Sunday, June 3, 2018 go to following numbers :417 - blue : AZ Alkmaar signed344 - blue : Odense BK32 - blue : [...] 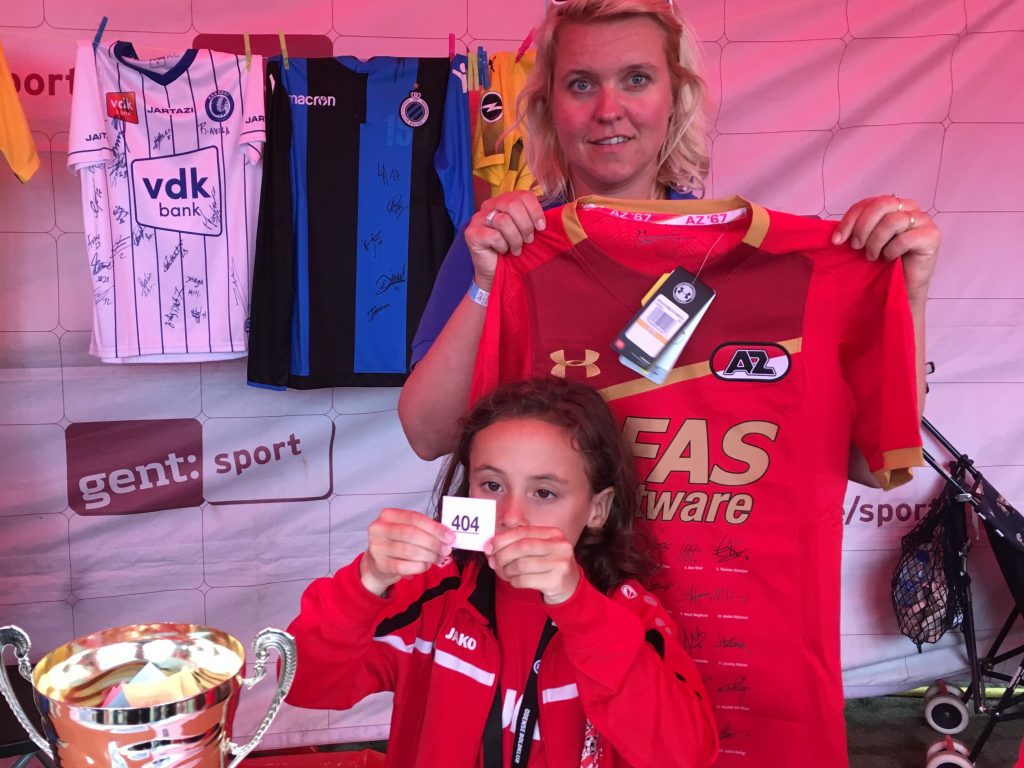 Anyone who bought a tombola ticket during the KDB Cup had a chance to win one of the signed shirts.Some innocent children's hands drew the winning numbers. The signed shirts of the A teams of the tombola Saturday, June 2, 2018 go to following numbers :404 - pink : AZ Alkmaar320 - pink : Odense BK347 - pink : Paris [...] 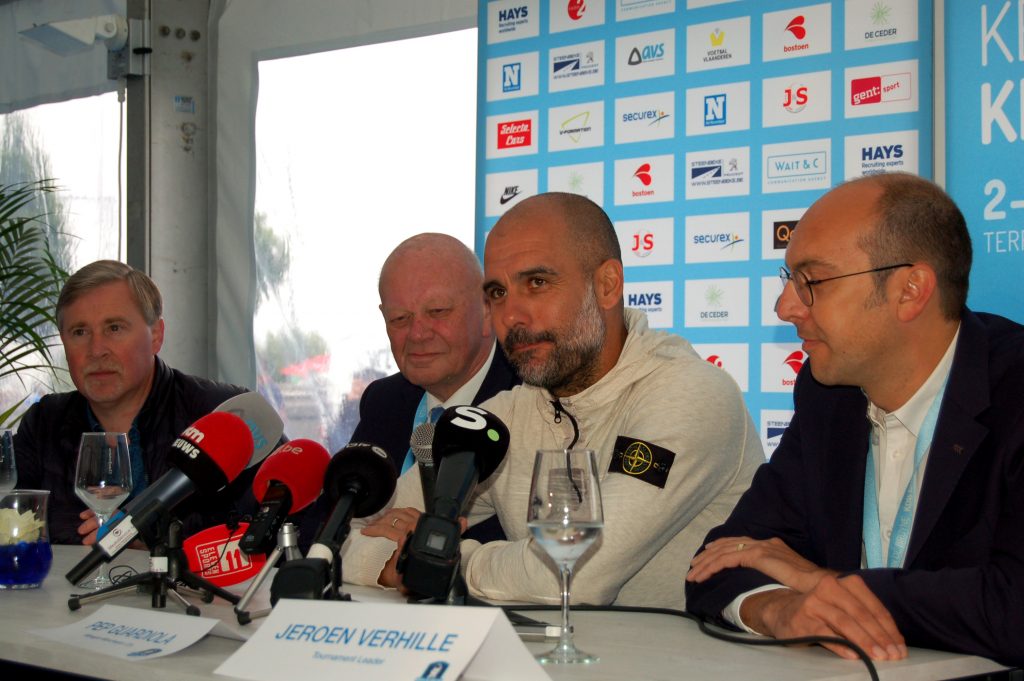 If there is one thing we can say, it is that Pep Guardiola has lost his heart to the KDBCup and youth football in general. During his presence, he visited the different teams to give them a boost. Pep was open to taking selfies and having conversations with the [...] 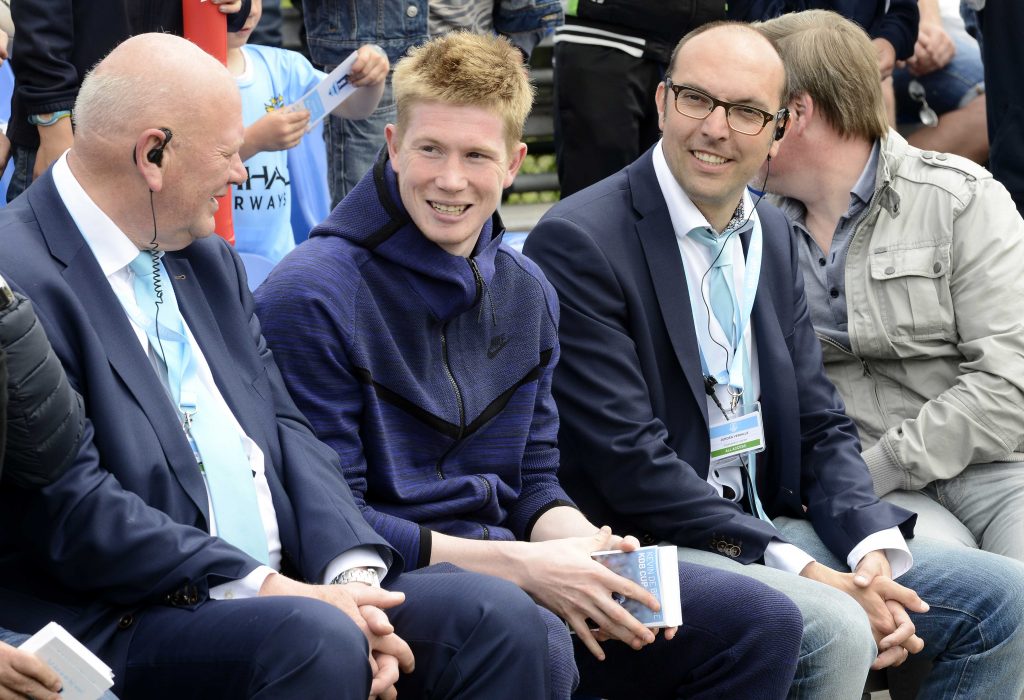 We just received the liberating message from the Red Devil that he himself will be present at the third edition of the KDB Cup, an international U15 tournament named after the 26-year-old Manchester City player, on Sunday 3 June 2018. The 59-time Belgian international could only give a definitive answer today, given the practice international [...]

Premier League Cup and the Carabao Cup at KDB Cup 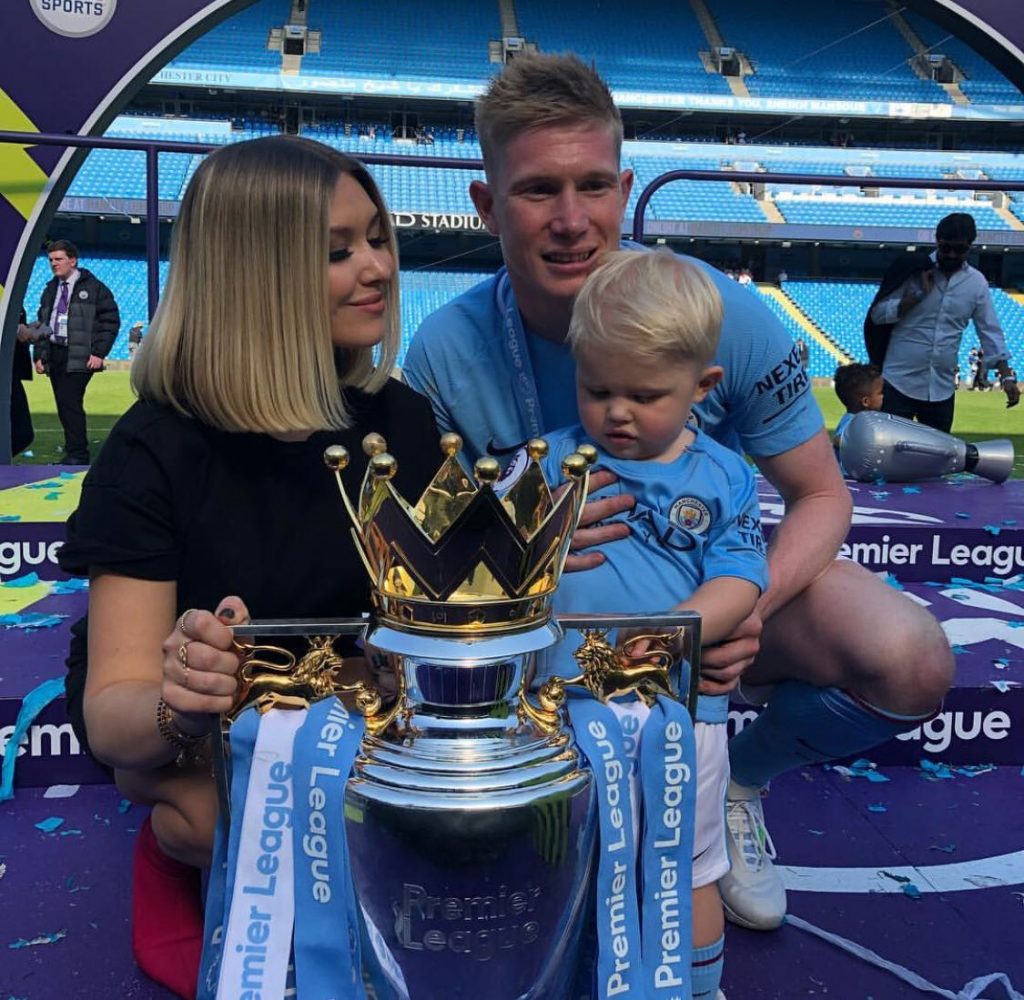 Not only is Pep Guardiola coming to the KDB Cup, but also the Premier League Cup and the Carabao Cup! Together with Blue Moon Belgium, the only official Belgian supporters club of Manchester City, KDB Cup made sure that these trophies can be seen up close. Spectators can take selfies next to or behind the cups, but touch [...]

Weekwatchers of Radio 2 on KDB Cup

Every Saturday morning Ruben Van Gucht looks back on the past week. On Saturday, June 2, he does this from the KDB Cup! Besides the regular guests, Frank Deboosere, Hans Otten, Bas Birker and Matthieu and Guillaume, Ruben welcomes a few more BV's. On 2 June he will be assisted by Walter Grootaers of De Kreuners and musical guest [...] 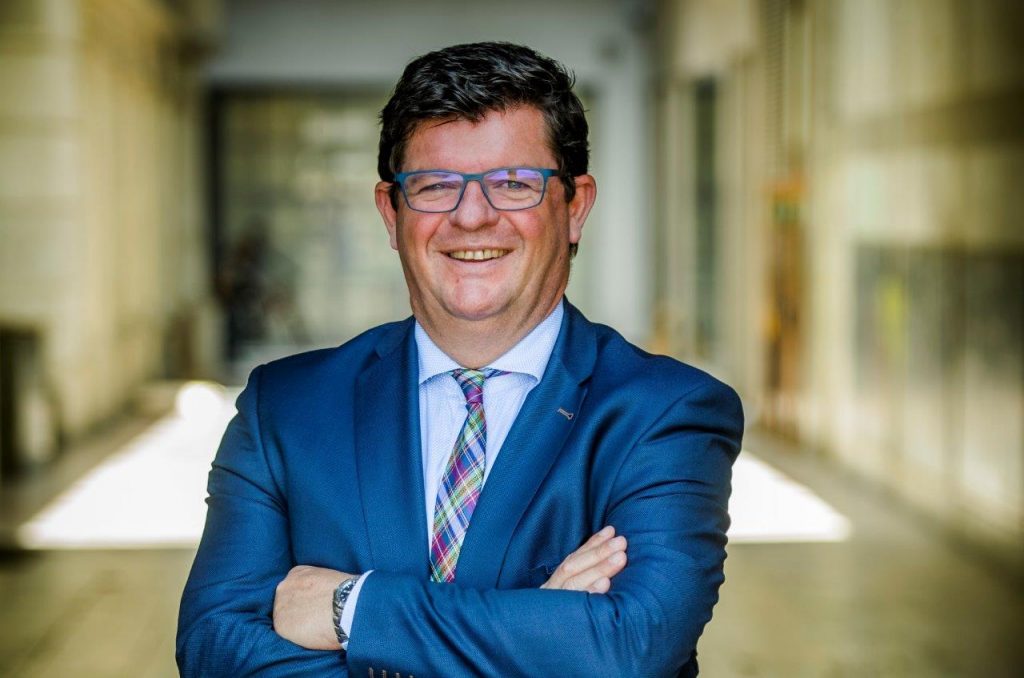 Just like last year, the spectators can enjoy demonstration matches by G-teams during the KDB Cup. On Saturday 2 June at 12.30, the G-teams of Sparta Petegem, Lembeekse Grasduikers and G-football Marke will play a demonstration match. The kick-off will be given by Flemish Minister of Finance, Budget and Energy Bart Tommelein. The 3rd edition of the [...]

Stars on the field 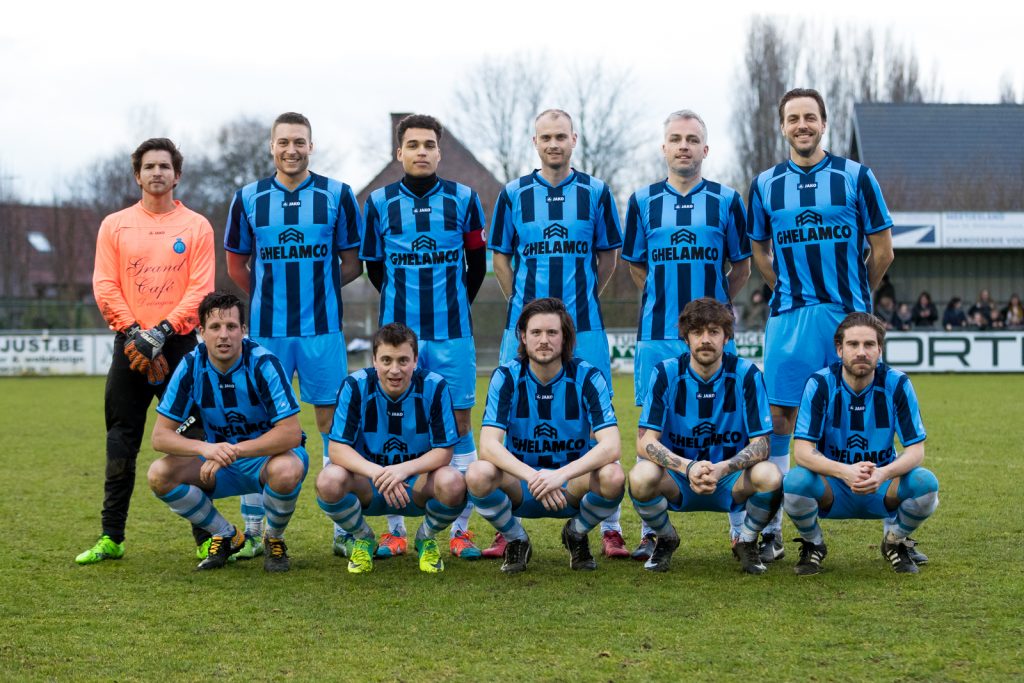 Star players led by Aster Nzeyimana and Christophe Stienlet competed against each other after the draw yesterday. Encouraged by numerous fans, the extended BV-teams, with crowd pullers Niels Destadsbader, Kevin Janssens, Andy Peleman and Jeremy Vandoorne, gave the best of themselves. It became an exciting match. Referee Bram Van Driessche led the match resolutely in the first [...].