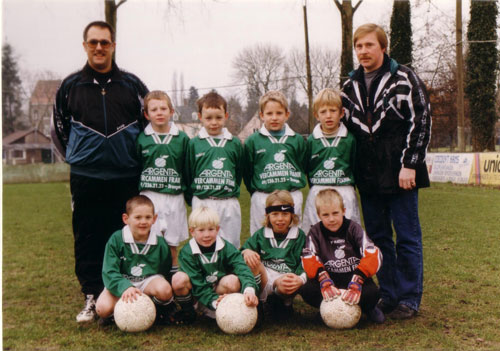 KDB Cup is an international youth tournament U15, in which Kevin De Bruyne connects his name to it. The tournament was organized for the first time in 2016. From the beginning, a high quality tournament was set up, where one could see football talents of the future at work. Many of the young talents go on to become part of the A-team of their club or are among the most sought-after young players in Europe such as Umaro Embola from Benfica(named best player at KDB Cup in 2016), Moriba Kourouma from FC Barcelona (best player 2017) and Jeremy Doku from RSC Anderlecht.

Although KDB Cup was only organised for the first time in 2016, it can already count itself among the top European youth tournaments. Domestic and foreign clubs praise the high quality level of the organisation. No wonder then that KDB Cup gets requests from clubs from all continents such as Japan, Russia and Brazil. Famous players such as Gunther Schepens, Tim Smolders, Tomasz Radzinski and Tine De Caigny like to take a look at the Cup. Even Pep Guardiolathe success coach of Manchester Cityflew over to see the talents with his own eyes.

The KDB Cup is a sporting event for young and old!

Kevin De Bruyne is a born in Drongen, born on 28th June 1991. Mum Anne, dad Herwig and sister Stefanie are without doubt his biggest supporters. Kevin started his football career as a 6 year old with KVV Drongen - now KVE Drongen. Kevin was quickly noticed and it didn't take long before he turned out to be a natural. After two great years at the Leie in Drongen he moved to KAA Gent, followed by KRC Genk in Belgium. From there it went abroad at a rapid pace: Chelsea FC, Werder Bremen, VFL Wolfsburg and Manchester City FC, where he signed a monster contract at the end of August 2015, at the age of 24, and immediately became the most expensive Belgian footballer ever. Meanwhile, he also grew into one of the best Red Devils, for whom he celebrated his debut in 2010.

Kevin is right-footed and, like his all-time favourite Zinédine Zidane, an attacking midfielder. Kevin provided 27 assists during his season at VFL Wolfsburg, earning him the nickname 'assistant king'. After winning the German Cup, he was also named Bundesliga player and footballer of the year. He also made his mark at Manchester City. He won the 'Premier League Playmaker of the Year' award, was in the 'PFA Team of the Year' and also won the best player of the season award at Manchester City in 2017.

Despite the fact that Kevin belongs to the world top, he still remains the boy from Drongen. Together with KVE Drongen, the team where it all started for him, he set up the KDB Cup. KVE Drongen, the former KVV Drongen, is since 2003 the merger between FC Baarle, VK Luchteren and KVV Drongen. With over 500 members, including over 400 youth players, KVE Drongen participates with about 30 teams in the regional and provincial competitions of East Flanders. The first team plays in the 1st province. Drongen also has a ladies team. A solid youth work and good training programs provide the perfect football education led by experienced trainers and a lot of enthusiastic volunteers. KVE Drongen is housed in the Keiskant Complex, a beautifully developed site with football pitches, 2 of which are artificial turf, well kept locker rooms and a nice canteen. Blue and blue are the colors of the club.

The KDB Cup is a sporting event for young and old!