KVE Drongen and Kevin De Bruyne are organising an international U15 football tournament for the first time. It will take place on 21 and 22 May 2016 on the grounds of KVE Drongen. A total of 12 domestic and foreign teams will compete over the weekend for the coveted KDB Cup Trophy.

Kevin De Bruyne, a true Drongen native, started his football career as a 6 year old at KVV Drongen - the current KVE Drongen. The popular Red Devil was quickly noticed, and would soon prove a natural talent. After barely 2 years he moved to KAA Gent, followed by KRC Genk in Belgium. From there, it was off to Chelsea FC, Werder Bremen, VFL Wolfsburg and Manchester City, where he signed a huge contract at the end of August and became the most expensive Belgian footballer ever. But despite the staggering amounts of money, his immense popularity and his world class footballer, Kevin has both feet firmly on the ground. With great conviction he said 'yes' to the question whether KVE Drongen could organise a youth tournament with him.
Kevin: "Children have always been close to my heart, especially now that I am about to become a father myself. It is an honor to have a quality youth tournament with my name from now on."
The fact that his parents and sister still live in Drongen (the grounds of KVE Drongen are in their backyard) and are still supporters of KVE Drongen, made the decision even easier. His parents and management are 100% behind the tournament and gladly lend their cooperation to the KDB Cup.

The organisers have spared no effort to present a top bill from the very first edition of the KDB Cup. There will be 12 elite U15 teams from no fewer than 8 different countries represented. Including some teams where Kevin himself used to play football.
- Austria Wien
- AZ Alkmaar
- Bayer 04 Leverkusen
- Benfica Lisbon
- Club Brugge KV
- Everton FC
- FC Barcelona
- FC Basel
- KAA Gent
- KRC Genk
- Tottenham Hotspur FC
- VFL Wolfsburg

The visitors may see a Messi, Neuer or even a De Bruyne in the making during the tournament weekend. Or at least players who have a bright future at home or abroad. It won't surprise you that a lot of scouts will come to the KDB Cup.

It is the very first time that such an international football event is organised in Ghent. The Ghent city council was immediately enthusiastic about the initiative.
Alderman of Sport Resul Tapmaz: "The City believes in the power of youth football in Ghent and is helping to build the future. Together with KAA Ghent, we initiated 'Every Talent Counts', a unique partnership of 12 local youth clubs with great sporting and social ambitions. The Kevin De Bruyne Cup will give Ghent a top international youth tournament. It illustrates the burning ambitions within youth football in Ghent.
The City of Ghent therefore gives its full support to the brand new youth tournament.

The Flemish government is also very sympathetic to the initiative and supports the KDB Cup financially. Flemish Minister of Sport Philippe Muyters is fully behind the youth tournament: "Initiatives like the KDB Cup fit in with the broad range of sports we want to promote in Flanders. They give our young people the chance to measure themselves against their peers on top international teams. That experience, in front of their own public, will undoubtedly be a factor in their future development. The fact that these international top players are coming to Flanders, and that someone like Kevin De Bruyne is lending his support, means a great deal of added value for the image of the Flemish sports policy."

The Kevin De Bruyne Cup is an initiative of KVE Drongen, the East-Flanders club that has been playing in the first provincial division for two years now. The idea of organising a tournament with the cooperation of Kevin came about a good year ago when 275 members of KVE Drongen travelled together to Lille to support their football hero during the Europa League game Lille OSC - VFL Wolfsburg.
Organiser Paul Naudts of KVE Drongen: "The togetherness we saw then demanded more. I didn't dare say it out loud then: 'I have a dream': bring Kevin to KVE. But given his international status and busy life, that turned out not to be feasible. The few times he still comes to Drongen, he prefers to be with his family and of course we fully understand that. I adjusted my dream: bring top level youth football in Drongen together with Kevin and lift youth football to a higher level. That seemed feasible. Kevin was all for us organising an international tournament that would bear his name. The fact that it would also have his full support exceeded our wildest expectations. It's nice to see how he still bears his roots.
That it will be a high quality tournament, is already clear. The Complex Keiskant where KVE Drongen is located, has been beautifully built and also seems suitable to organize a prestigious international youth tournament. Thanks to the City of Ghent, the grounds will be further optimized in the coming months. KVE Drongen counts almost 470 members including over 380 youth players. Enough helping hands (and feet) to make it a high quality tournament.

In the coming months you will not be able to look away from the KDB Cup. Besides large posters, banners and this website, we also want the KDB Cup to be prominent in social media. Like our Facebook page www.facebook.com/kdbcup and follow us on Twitter @kvedrongen Through the hashtag #kdbcup and through all these channels you can get the latest news about the Cup. Kevin will also occasionally share something about his tournament. 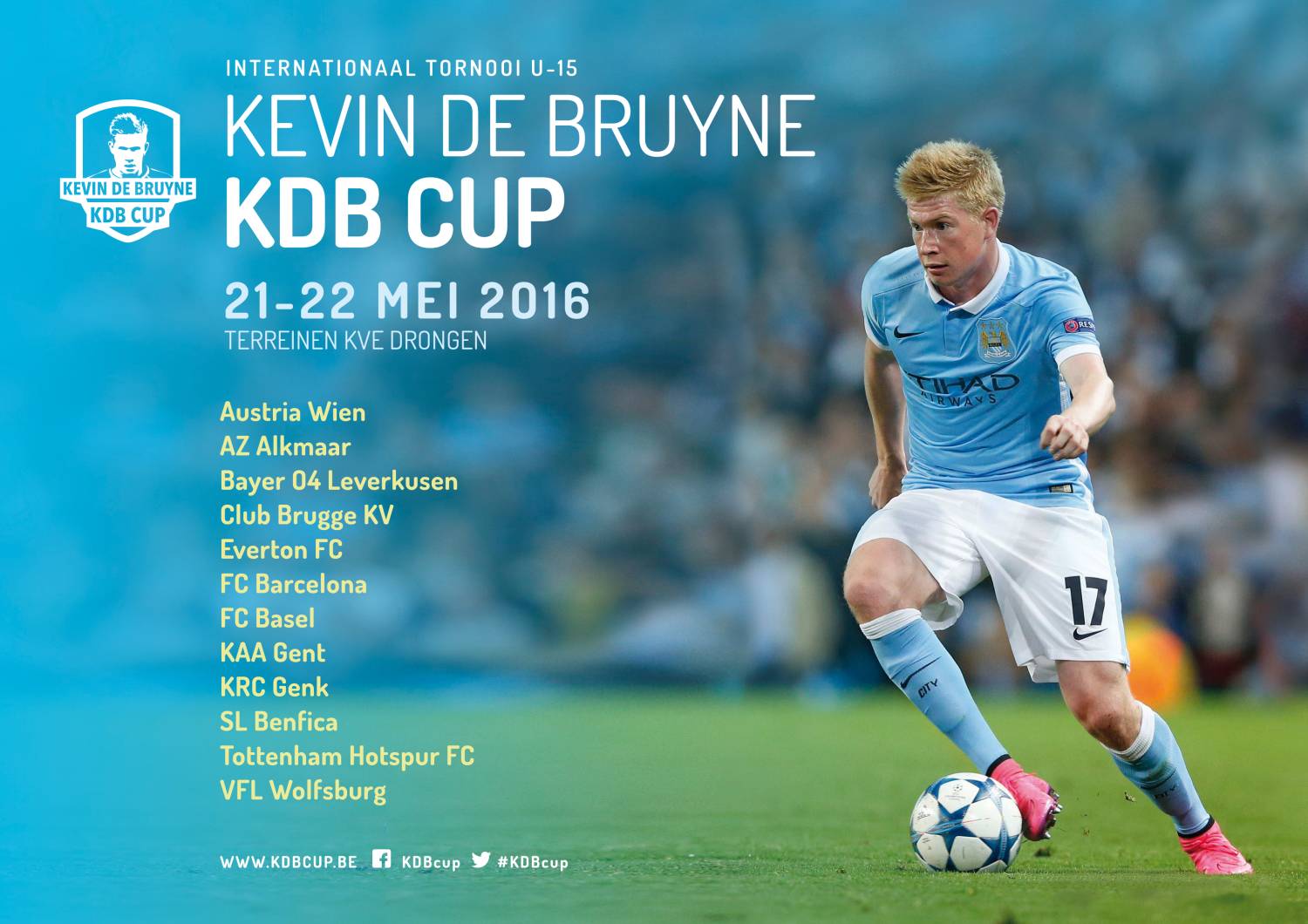