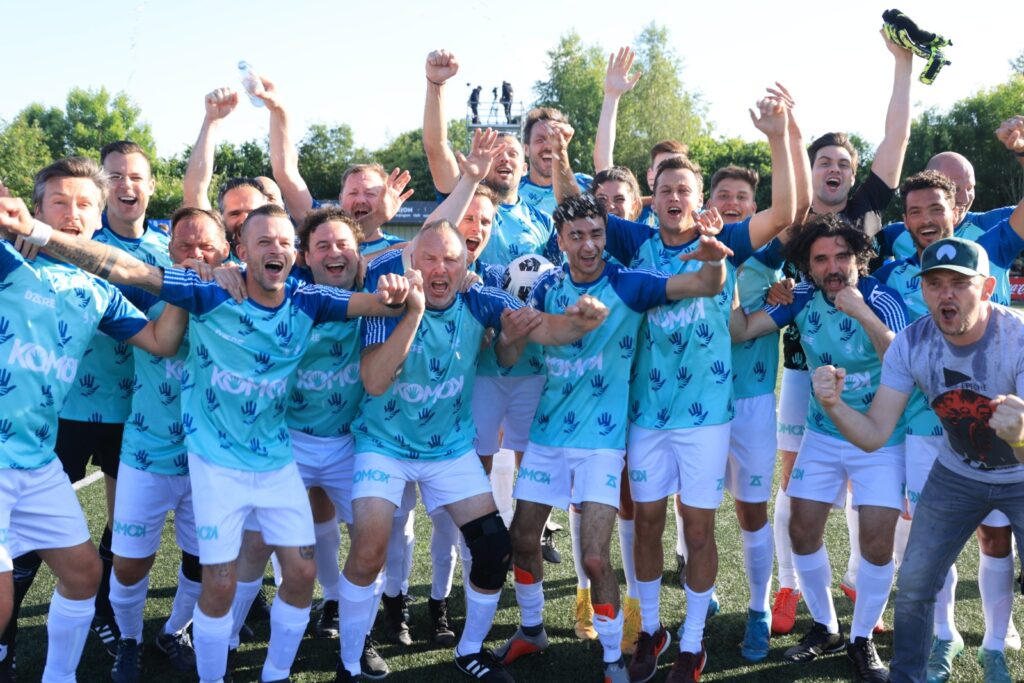 Team Christophe has won the BV tournament at the Kevin De Bruyne Cup 2022. Stienlet and his companions defeated the team of "Slimste Mens" Erik Van Looy in the final. Under a bright summer sun, 1,500 spectators enjoyed the skills of the showbiz celebrities and old soccer legends. Big surprise: Kevin De Bruyne himself showed up for a notable raid on Team Aster. President Paul Naudts gloated, "This is amazing". Tomorrow at 9:30 a.m., the festive 5the edition of the international U15 tournament that includes Manchester City, Real Madrid and Paris Saint-Germain.

Perfect soccer weather for the first-ever edition of the BV tournament, a nice gift for the fans on the day before the 5the edition of the Kevin De Bruyne Cup. Aster Nzeyimana, Erik Van Looy and Christophe Stienlet had rounded up a host of BVs and former professional footballers. National coach Piet den Boer had brought along his 'Special Devils', the (recently formed) Red Devils with a mental disability. To prevent overcrowding, the number of tickets was limited to 1,500. They were all sold without a hitch.

Kevin De Bruyne: "After 25 years I want to play soccer again in Drongen".

Kevin De Bruyne only became champion for the fourth time with Manchester City. He was also voted best player in the Premier League last season. But 'our' remains above all a modest Drongenaar - and so it was with great pleasure that he came (unannounced!) to take a look at the big event that bears his name. More than that: he put on a Team Aster jersey and entertained the public with some striking substitutions.

"The level was a little lower than I'm used to" laughed Kevin afterwards. "But I think people would like to see me play soccer again in Drongen after 25 years..."

Paul Naudts, the chairman of the KDB Cup, walked around with a big smile on his face the whole day. He personally welcomed each U15 team that came to train on the grounds of KVE Drongen. At the same time he kept one eye on the field with the BVs... and of course on King Kev'. "Beautiful weather, lots of (clean) people, brilliant soccer and a great atmosphere. We wanted to do something special to mark our first anniversary - the 5the edition - to celebrate. Well: we succeeded. In a word 'amazing'!"

Erik Van Looy (60) stopped playing soccer permanently two weeks ago. At the KDB Cup he discovered a new passion: coaching. "I was forced to stop but I coached my team for the first time today and I liked it. My very first decision as a coach: to remove myself from the team." Van Looy was walking on clouds, by the way, for a very special reason. "I've met Harrison Ford, Tom Cruise, Nicole Kidman, you name it, but today I was able to shake hands with Kevin De Bruyne and talk to him for a while. Those Hollywood stars can't compete with that. I knew about the KDB Cup but I had never been there before. Wonderful initiative, chapeau to the organization and the many volunteers."

After the BV tournament, DJ Neon ("house DJ" of KAA Gent and known from Tomorrowland, among other places) set the Open Air Party ablaze. The perfect prelude to what will undoubtedly be a memorable edition of the KDB Cup.