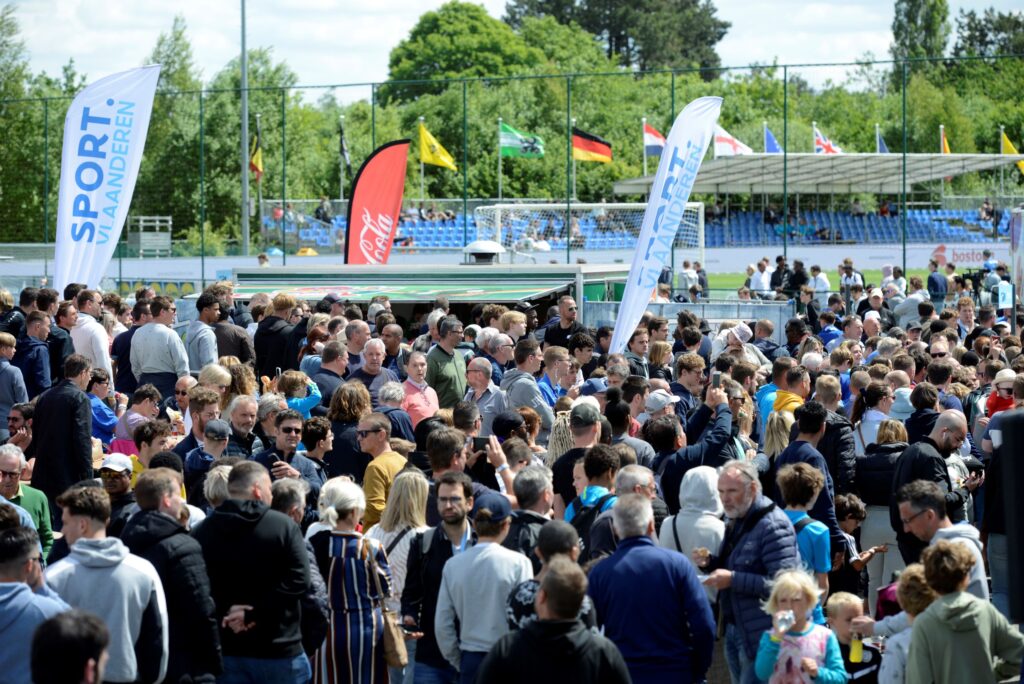 On Saturday, May 28, day 1 of the festive 5the edition of the Kevin De Bruyne Cup, many thousands of soccer fans came to Drongen to see the future of European top soccer at work. The youngest also came in large numbers to have their picture taken and receive an autograph from 'King' Kevin De Bruyne. For the second day in a row, he came to taste the atmosphere at his tournament and saw that it was good: "I enjoy the contact with the fans. Tomorrow (among other things) the semi-finals are on the program. Manchester City takes on Real Madrid; KRC Genk meets FC Barcelona.

The weather gods were kind to the KDB Cup. For the second day in a row - day 1 of the international U15 tournament - perfect soccer weather: about 16 degrees, cloudy but dry and sunny. Some 7,000 (!) soccer fans came to see the best young footballers in Europe at work. It created a true festival atmosphere as we know it from the Gentse Feesten. The biggest difference: at the KDB Cup, soccer always comes first.

No Chelsea FC in the quarter-finals. The defending champion (winner of the 2019 KDB Cup) lost its first match against Ajax and then played a draw against Club Brugge. Club did make it to the quarterfinals but lost to Manchester City. At the same time, KRC Genk surprisingly defeated Ajax: after 1-1 in regular playing time, Genk won after penalty kicks. FC Barcelona took the measure of Paris Saint-Germain (2-0), Real Madrid canned OSC Lille (3-1).

This already results in two top matches in the semi-finals, tomorrow. Manchester City versus Real Madrid is the big one. Genk - second in the Belgian league after Gent - defends the Belgian honor and finds Barcelona on its way to the final. The other teams battle for the honor (places 5 to 12).

Kevin De Bruyne: "A little time for my kids at the KDB Cup"

Kevin De Bruyne briefly put on his soccer shoes yesterday during the BV tournament to join Team Aster, to the surprise - and delight - of all the fans. Today, he came with his wife Michèle and children Mason Milian and Rome to enjoy the atmosphere. He also made time for a photo and autograph session with the youngest fans. Only then was it the media's turn. "Despite the crowds, I do enjoy the contact with the fans. Although it still feels strange that so many people look up to you. Even more important at the moment is the fact that I have some time to involve my children in what I do, and spend moments together. During the season, of course, there is hardly any time for that. Here at the KDB Cup, I can do that, which is a bonus."

After the end of Day 1, halfway through the 2022 edition of the KDB Cup, tournament director Jeroen Verhille already made a first analysis. "The success of our first day exceeds my wildest expectations. I had quietly counted on 10,000 visitors during the entire weekend beforehand. We will undoubtedly go over that. In a way that makes sense, the fans find the ultimate soccer enjoyment here: seeing future top players at work, and at the same time the chance to run into stars like Kevin, Dante Vanzeir, Carl Hoefkens, Hein Vanhaezebrouck and Patrick Kluivert. It's great, by the way, that a world-class footballer like Kevin makes so much time for a photo session with our youngest visitors. Class."